I recently stayed in an inside cabin on the Marella Explorer during a 90s themed cruise. It was one of the nicest inside cabins I’ve ever had with an incredible amount of storage. The cabin had 16 drawers, 16!

We will also look at cabins to avoid.

All cabins were refurbished when the ship was taken over by Marella in 2018. The Marella Explorer was previously Mein Schiff and before that was Celebrity Galaxy.

It can be quite a squeeze to share a cabin with 2 or 3 other people but it is doable. They drop down beds are most commonly used for children although they do accommodate adults too. If you’re particularly tall your feet may hang off the end though! I have shared a cabin with 3 other adults before, it isn’t ideal but for a short cruise it isn’t a problem. 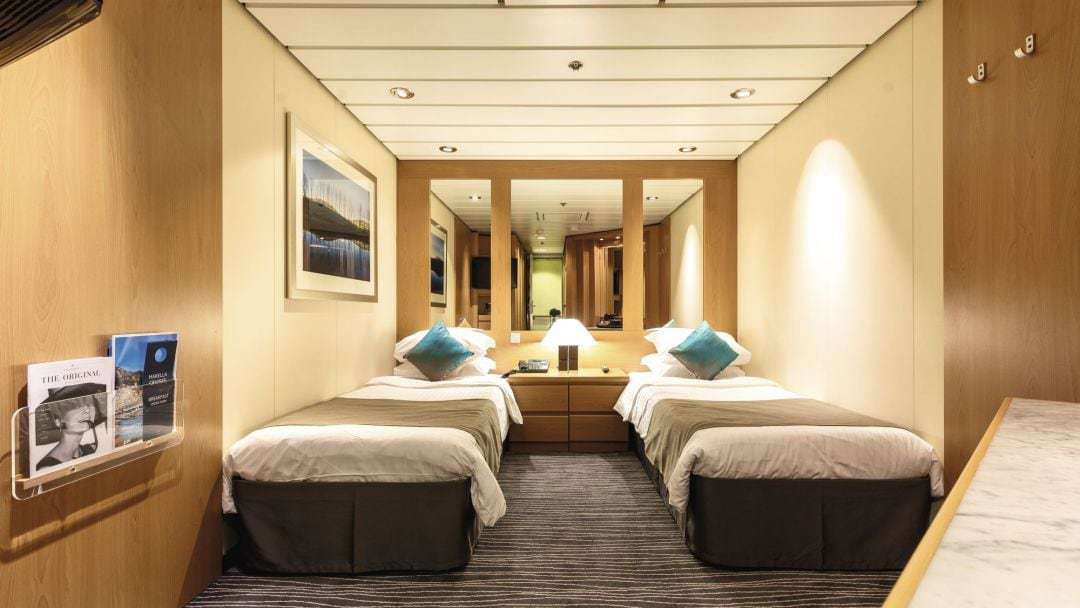 The cabin was a good size. It is pretty standard size by cruise ship standards measuring around 16m2 but because of the number of mirrors and the light decor in the cabin, it felt much bigger. We only stayed in the cabin for 3 nights so didn’t have very much luggage, as a result, we only filled up about 4 of the 16 drawers! 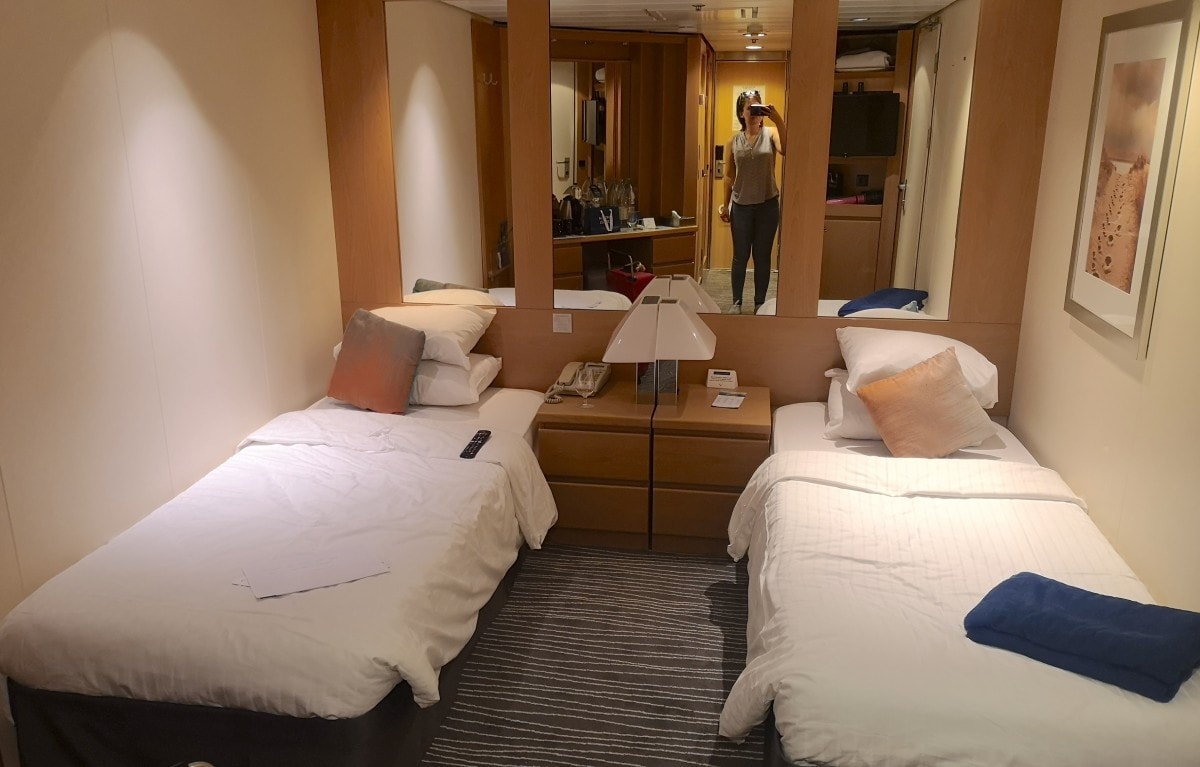 What I didn’t love:

In ALMOST all cabins the beds can either be arranged as a twin or as a double bed. If you arrive and the beds aren’t set up how you’d like, just let your cabin steward know and they’ll change these for you.

In addition to the 16 drawers, there were also TWO wardrobes/closets in the cabin. The cabin had more storage space than I’ve ever had in any cabin. The same goes for the bathroom, there was lots of room to clear away your toiletries. 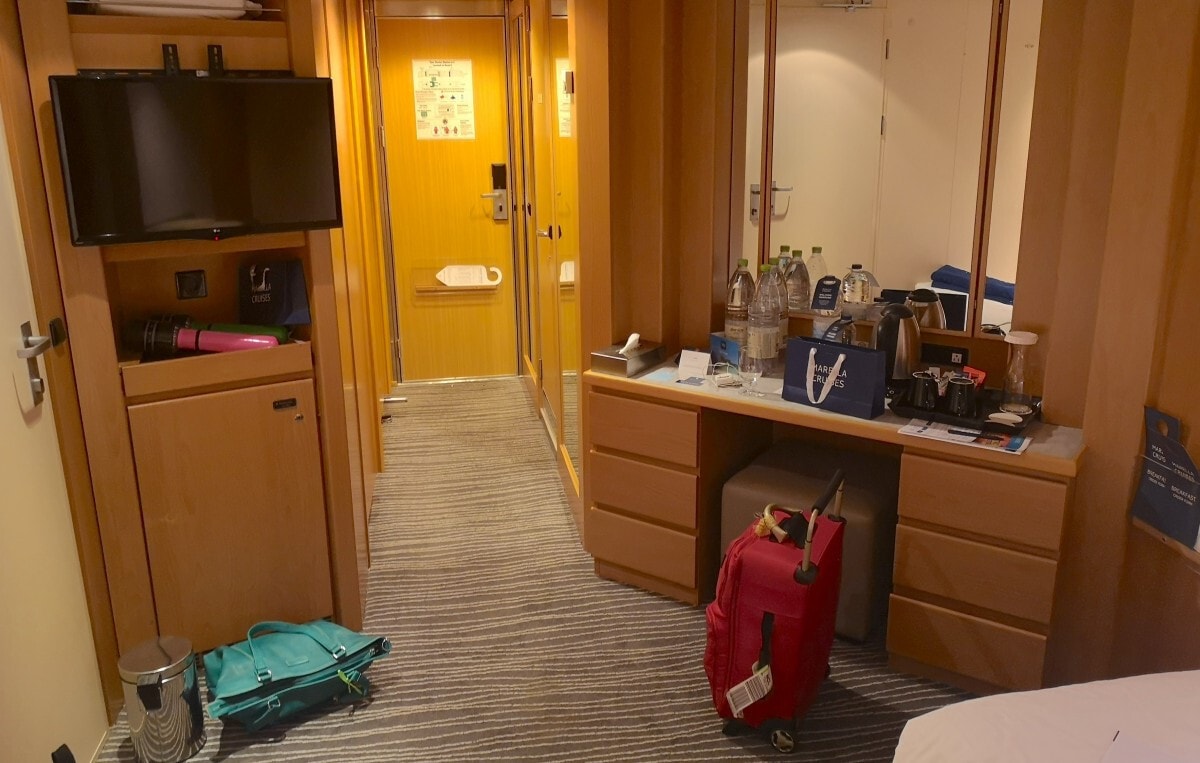 Our cabin was 4187 which is right at the aft of the ship. We only had one cabin between us and the aft of the ship which did mean that we had a long walk from the other end. That wasn’t a problem for me though and a few extra steps on a cruise is usually for the best with all of the food available!

Trying to hit 10,000 steps a day is just one of the ways that I prevent weight gain when I cruise. If you’d like to find out how you can avoid cruise weight gain, while still treating yourself, start by reading this post: Avoid Cruise Ship Weight Gain, 7 Easy Things You Can Do.

Do The Cabins on The Marella Explorer have TVs?

Do The Cabins on The Marella Explorer have Kettles?

Yes. All cabins on the Marella explorer come with a kettle and some tea/coffee making facilities.

Do The Cabins on The Marella Explorer have Safes?

Yep, all cabins have safes. In our inside cabin, the safe was behind the mirror which was above the desk. It would be very easy to go the full cruise without knowing that it was there!

The outside cabins on the Marella Explorer are almost identical to the inside cabins. The style is the same but the size is slightly bigger.

Outside cabins come with either a porthole window or bigger square window like the one shown below. The size of the window depends on which deck you are on. 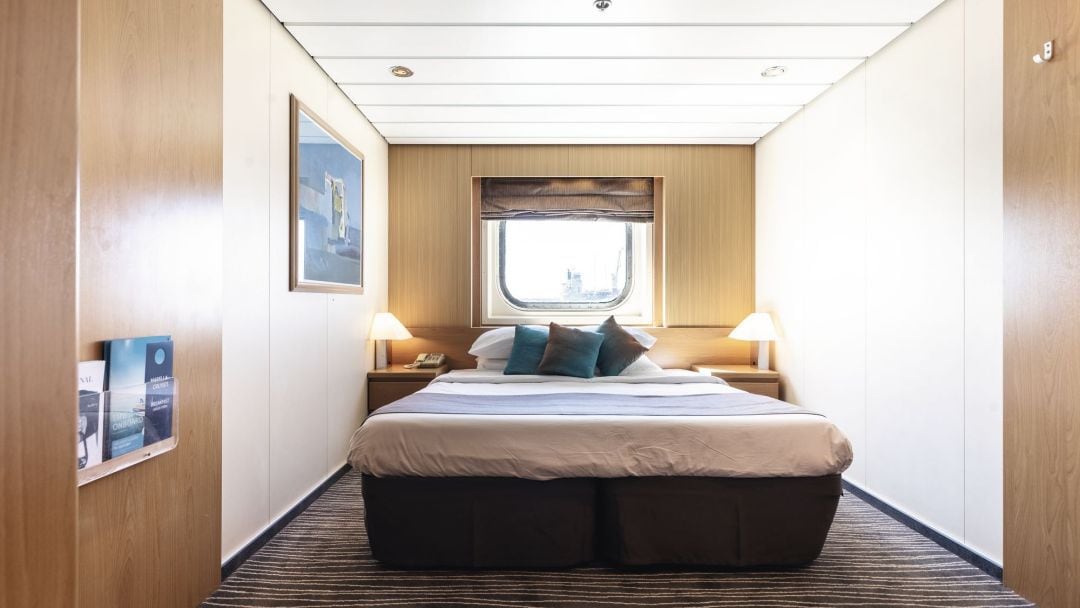 What is in the Balcony cabins on board the Marella Explorer? 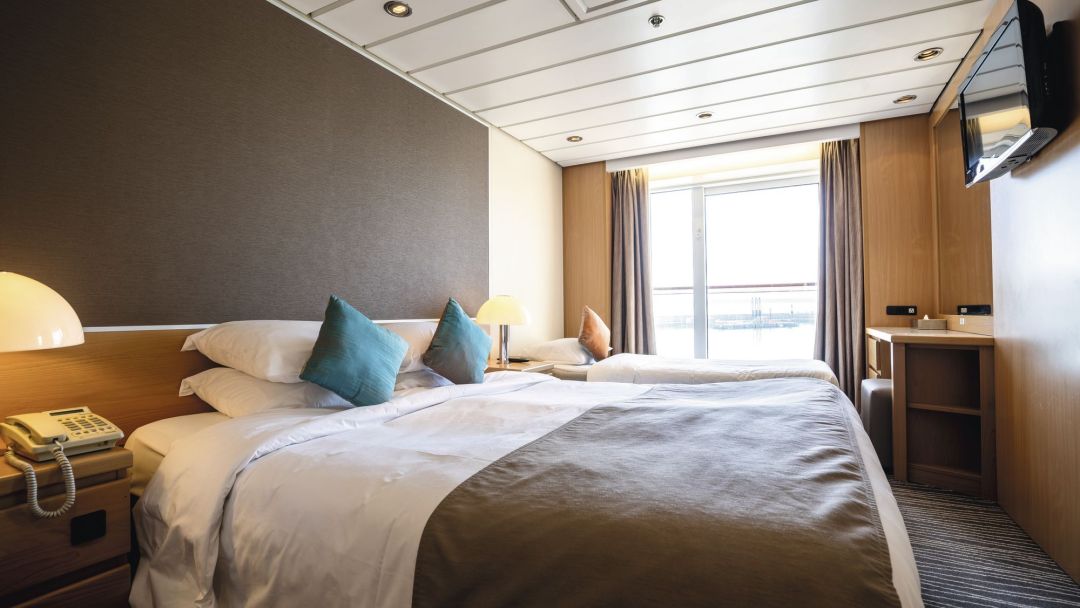 The size of the balcony is pretty standard. It isn’t the biggest in the industry but isn’t the smallest by a long way. 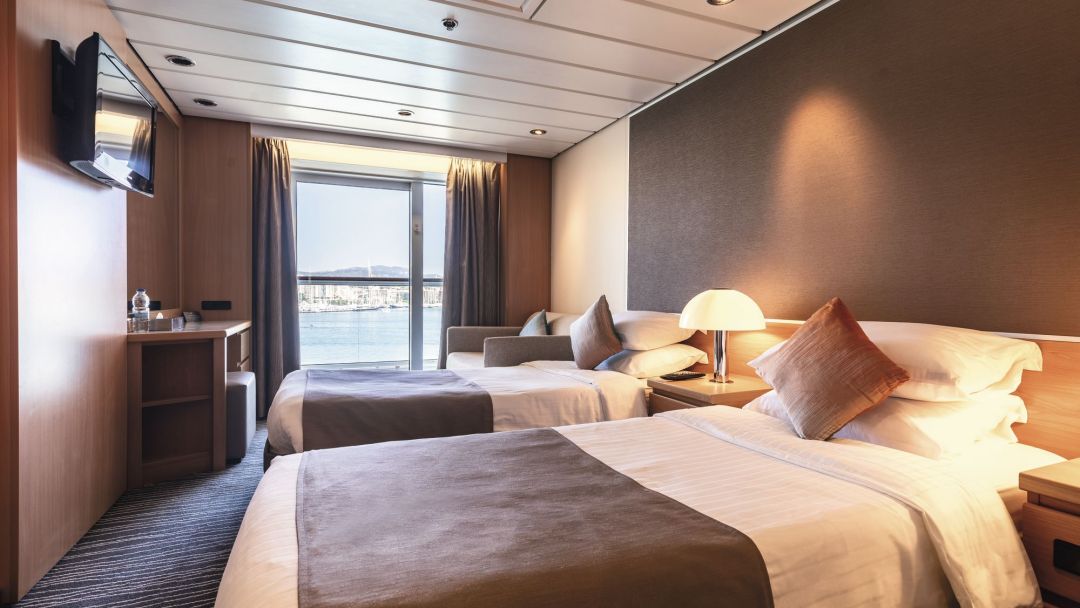 The sofa pulls out as is a sofa bed for the 3rd passenger. This might not be suitable if you are a particularly tall adult but these are usually fine for children or smallish adults. Unusually the cabins don’t have room for a 4th guest but there are some family cabins available for those that need an extra bed. 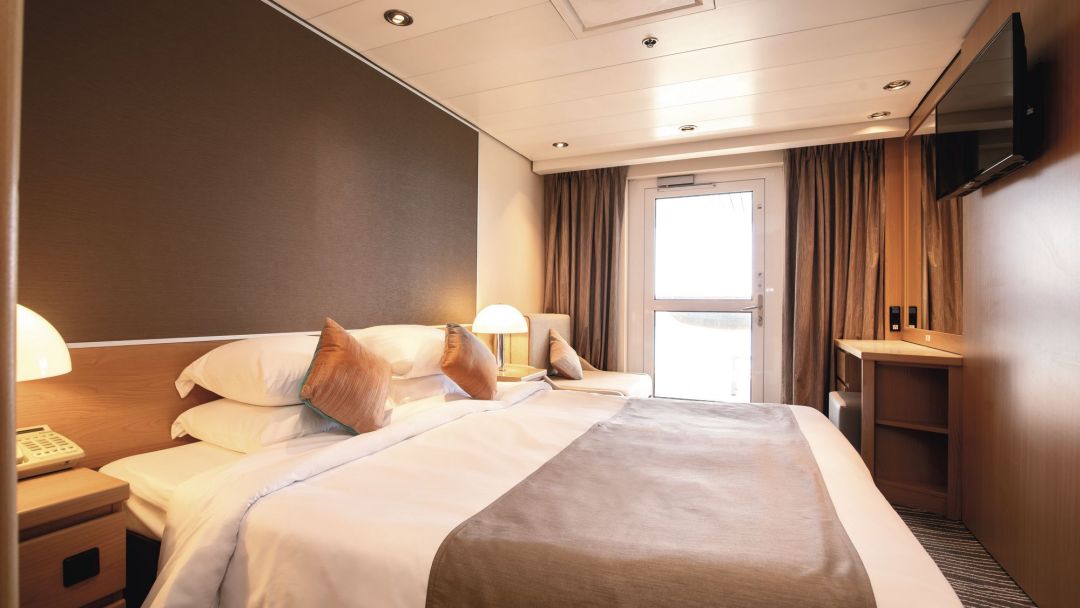 The family balcony cabins are new additions and they are massive! It’s 20m2 and sleeps up to five. These are actually the biggest non-suite balconies that I’ve ever found on a cruise ship. The balcony has two chairs, a table, a hammock, and two loungers.

We had a family balcony cabin on deck 10 and it was fab! Didn’t feel any rolling or vibration any more than on the rest of the ship. And quiet too, despite being under the Mediterranean restaurant and bar. The cabins are a good size too with a sliding door to divide the room for privacy. – Gail 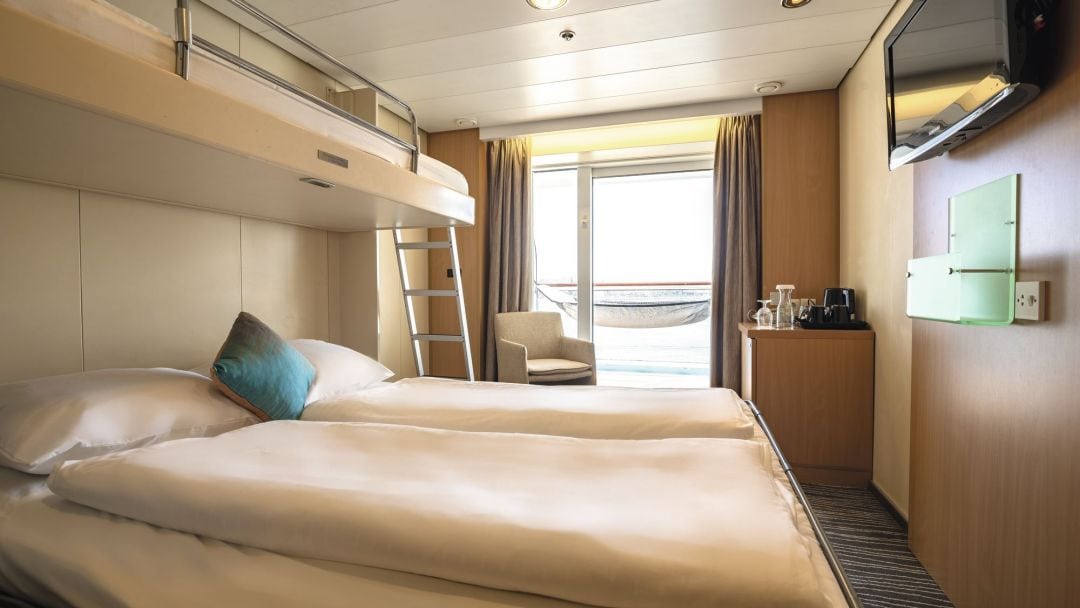 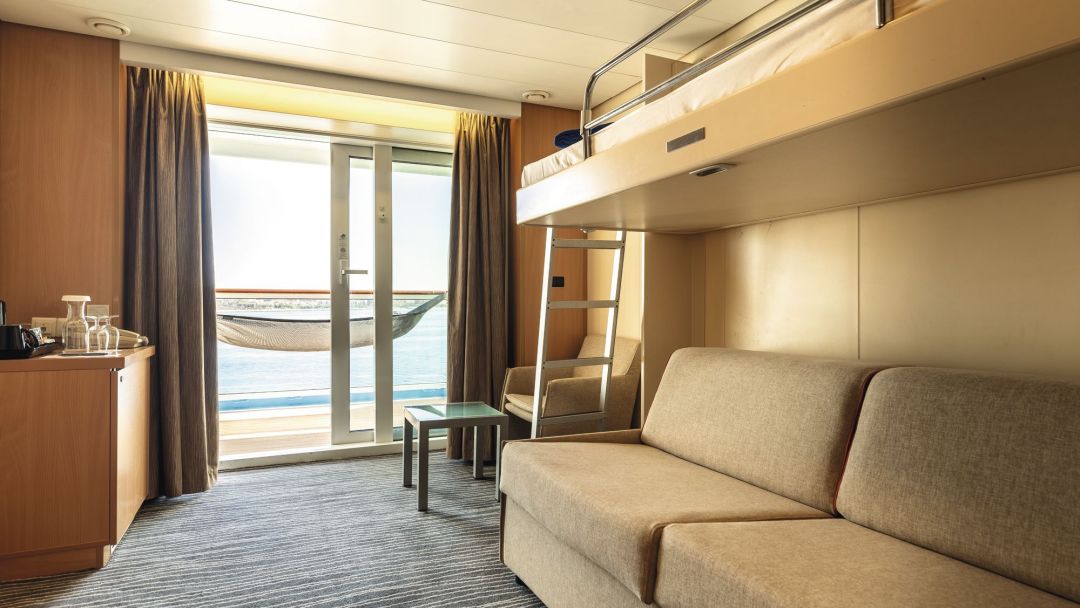 The junior suite is a whopping 22m2! My favourite part about this cabin is the fact that the bed faces the window.

This probably doesn’t affect anybody apart from me but… It is worth noting that this means that you are sleeping sideways in the ship (similar to the inside cabins) if the weather is rough you’ll feel yourself going up and down the bed which I really don’t like, in standard balcony cabins you end up going side to side which is better for me.

I do get quite seasick though so if you are worried about seasickness at all check out this post: 13 Cruise Seasickness Tips – From Somebody Who Gets Seasick. 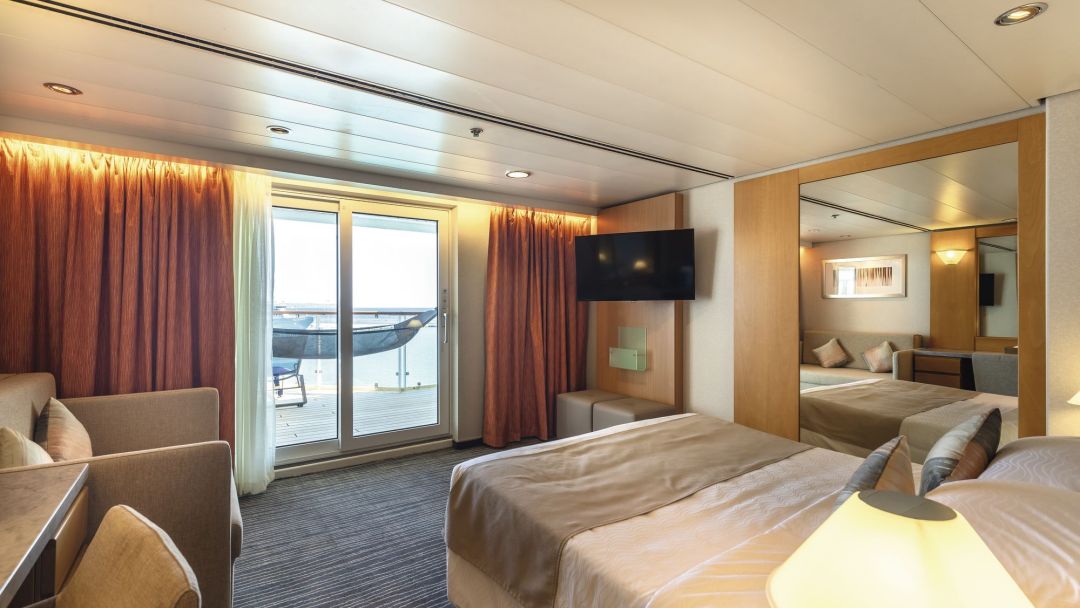 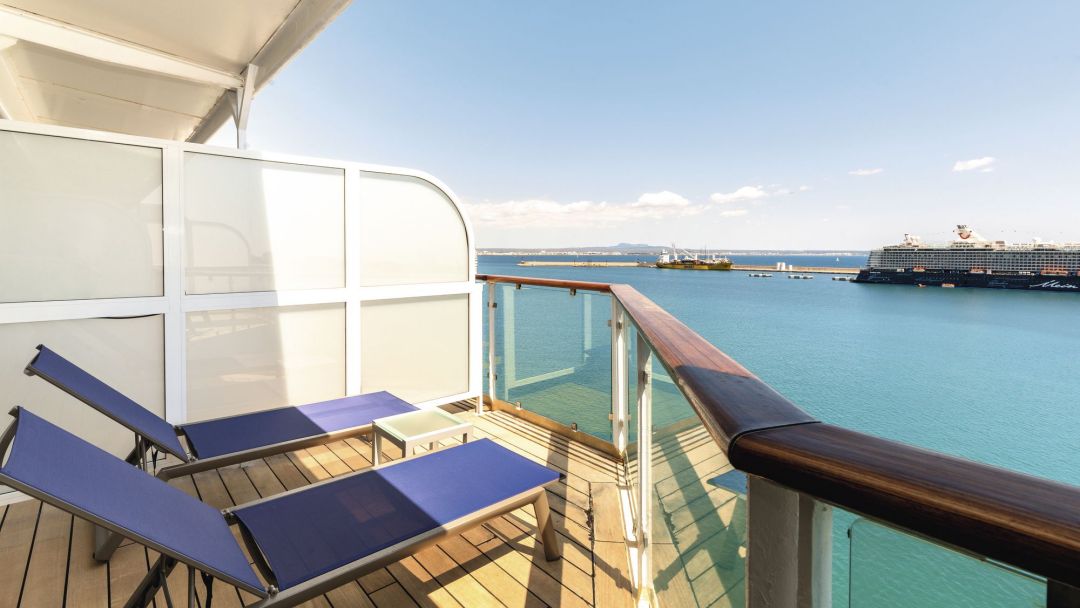 The executive suite is the biggest cabin on the ship measuring in at 49m2. It sleeps 4, two people in a regular bed and two more on a sofa bed. The cabin has a separate living room with a dining table.

Absolutely fantastic room. Booked for a ‘big birthday’ and definitely made the experience unforgettable! Well positioned, not too close or far from lifts, only one flight of stairs to pool deck. A little noise from above when sun loungers were being put out or tidied away but nothing much at all.  – Erin 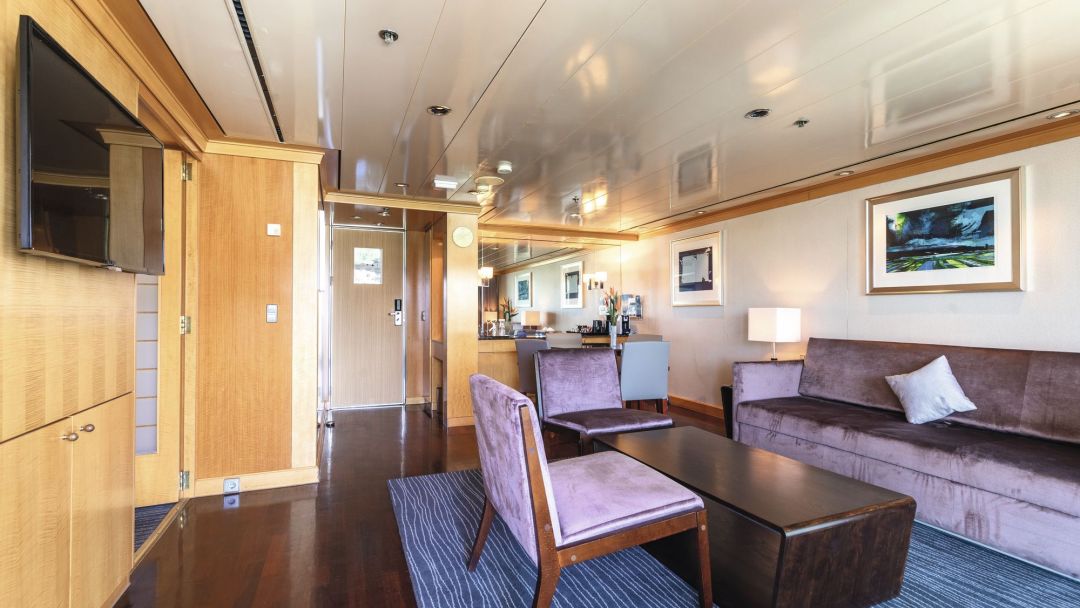 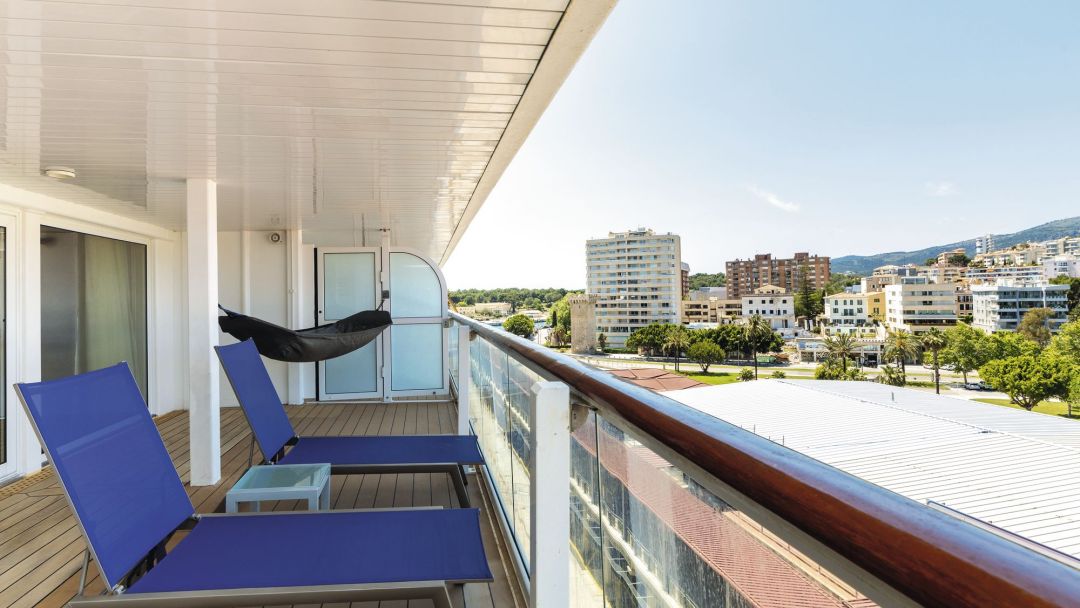 Does The Marella Explorer Have Solo Cabins?

Technically speaking no, there aren’t any cabins created specifically for solo use. That said Marella do have some inside and outside cabins set aside as ‘solo’ rooms. This means that if you cruised in one of these cabins you wouldn’t have to stay in a smaller cabin which is often what happens to solo cruisers.

If you are considering cruising Solo start by reading this post, it details my personal favourite cruise lines for solo cruising. Marella are on the list along with many others. Best Cruise Lines For Solo Cruisers (Tried and Tested Pros and Cons).

Do The Cabins on The Marella Explorer have Hairdryers?

Yes. All cabins on the Marella Explorer have hairdryers, there is no need to bring your own. Interestingly some of the cabins still have an old-style hairdryer on the wall of the bathroom, they also have a newer style one in the main cabin.

What plug sockets are on the Marella Explorer?

In the inside cabins, there is one EU and one US plug socket on the desk. Under the TV there is another EU socket. I would recommend bringing some sort of plug which allows you to charge more than one thing at once.

Make sure you pack adapters! This is one of the most common things for first-time cruisers to forget. You can find my full list of cruise essentials on our resource page here: Resources & Discounts.

Do The Cabins on The Marella Explorer have Irons?

No. None of the cabins on the Marella Explorer have irons. There isn’t a self-service laundry so if you do need something ironed you would have to pay for this. An alternative is to buy a spray which drops the creases from clothes.

The following cabins to avoid were provided by guests who cruised on the ship.

The following cabins towards the aft of deck 10 onboard Marella Explorer are directly below the buffet. Some cruisers staying in these cabins have reported noises of things like chairs being moved.

This shouldn’t be a big problem as the buffet isn’t open late into the night but it may be worth something to bear in mind.

If you have young children/like to sleep early it may be worth avoiding these cabins as some guests have reported hearing music in these cabins.

The cabins at the front of deck 5 are belong the broadway theatre. Theatre shows usually end by 11pm but if you like to go to sleep earlier than this it may be worth avoiding these cabins.

Want to learn how to cruise well on a budget? Start here: How to Cruise For Less

Hey, I'm Emma, an award-winning cruise blogger, and YouTuber. I share cruise tips, tours, and videos on this website to help you master cruising on a budget. You can learn more here: About Me.

link to Like Cruising With American Cruise Lines? You May Enjoy Marella Cruises

This post is sponsored by Marella cruises, all opinions are my own. I have cruised with Marella multiple times and this post is based on my experiences cruising with Marella and the other cruise...

Hey, I'm Emma, an award-winning cruise blogger, and YouTuber. I share cruise tips, tours, and videos on this website to help you master cruising on a budget.

Cruising cheaply has allowed me to see more of the world than I ever thought possible and there's still so much more exploring to do!